Analysts expect the Keppel Club site to attract keen interest among developers, given the rarity of securing a waterfront site. They also expect robust interest for the 6,000 HDB flats to be built on the site, with the four-room units likely to be priced at over $700,000.

The Keppel Club site will feature around 6,000 public housing flats, with the first Build-to-Order (BTO) project set to be launched within the next three years, reported Channel News Asia, citing Minister for National Development Desmond Lee.

Spanning about 48ha, the site will be redeveloped for housing once its lease “runs out”, said Lee.

And since it is close to green spaces and the coast, the site will “offer unique waterfront living, close to nature”, he noted.

He added that the ministry “seeks to keep the estate car-lite”, given its central location and proximity to two MRT stations.

“The housing estate will have new parks and open spaces which feature walking trails that connect to the MRT stations. This will provide residents with easy access to transport nodes and new social and commercial facilities,” said Lee.

In addition to being located next to Labrador Nature Reserve and the Southern Coastline, the site is also a short commute to Telok Blangah Hill Park. Residents can enjoy the benefits of living near nature, with lush greenery and waterways in the vicinity.

For now, it is not known if these Greater Southern Waterfront BTO flats will fall under the Prime Location Public Housing (PLH) model. More details will be released closer to the launch of the flats, which is expected to happen within the next three years.

Related article: Greater Southern Waterfront: Here’s Everything We Know so Far about the Area (Including the 6,000 Upcoming BTO Flats)

2) Will government include Greater Southern Waterfront under the PLH model? 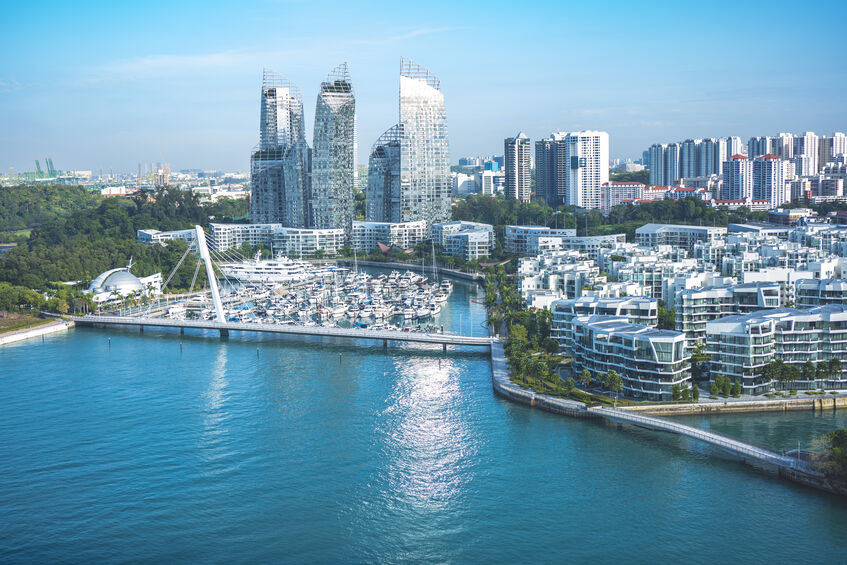 The Greater Southern Waterfront BTO flats will fall under the mature HDB estate of Bukit Merah.

The launch of the first BTO project within the Greater Southern Waterfront in three years will kickstart the area’s transformation into a mega waterfront development along the southern coast of Singapore, reported The Straits Times.

With this, there has been a question on whether the 6,000 HDB flats to be built within the Keppel Club site will come under the PLH model.

The HDB explained that the model would apply to selected public housing projects within prime and central locations like the city centre as well as surrounding areas, including the Greater Southern Waterfront area.

And while the Keppel Club site is situated within the GSW, various factors, such as the project’s attributes, market values and location, will be considered by authorities before deciding on whether the PLH model will be applied.

Notably, flat owners under the PLH model are subject to stricter buying and selling conditions, such as a longer Minimum Occupation Period (MOP) of 10 years and the additional subsidy clawback once they sell the flats.

In the upcoming May 2022 BTO launch, we may see two PLH BTO flats in the May 2022 Bukit Merah and May 2022 Queenstown BTO launches. However, this is unconfirmed as HDB only releases more details about the projects during the BTO exercise.

The 6,000 new public flats to be built on the redeveloped waterfront site of Keppel Club will attract robust interest, with analysts expecting the four-room flats to be priced at over $700,000 if sold as a regular BTO project, reported TODAY.

Some analysts said such flats should be offered under the Prime Location Public Housing (PLH) model to make them more affordable while also mitigating the “lottery effect” among flat owners.

“Given the attractive site attributes, we would consider the future flats on the Keppel Club site to be in the ‘limited edition’ category,” said Wong Siew Ying, Propnex Realty’s Head of Research and Content.

“As such, we think that the HDB flats offered should come under the PLH model because of their ‘extremely prime location’.”

About a 10-minute drive to the Central Business District (CBD), the site – a part of the Greater Southern Waterfront project – is bounded by Berlayer Creek, Bukit Chermin and Telok Blangah Road. It is also near the Telok Blangah and Labrador Park MRT stations.

As seen in past BTO application rates, application rates tend to be higher in mature HDB estates, despite the higher launch prices. Due to the location of the Greater Southern Waterfront BTO flats, it is likely that competition will be stiff for these flats when they are launched.

Related article: HDB BTO Application Rate (From 2020 to Now): Which Estates Are The Easiest To Get BTO in 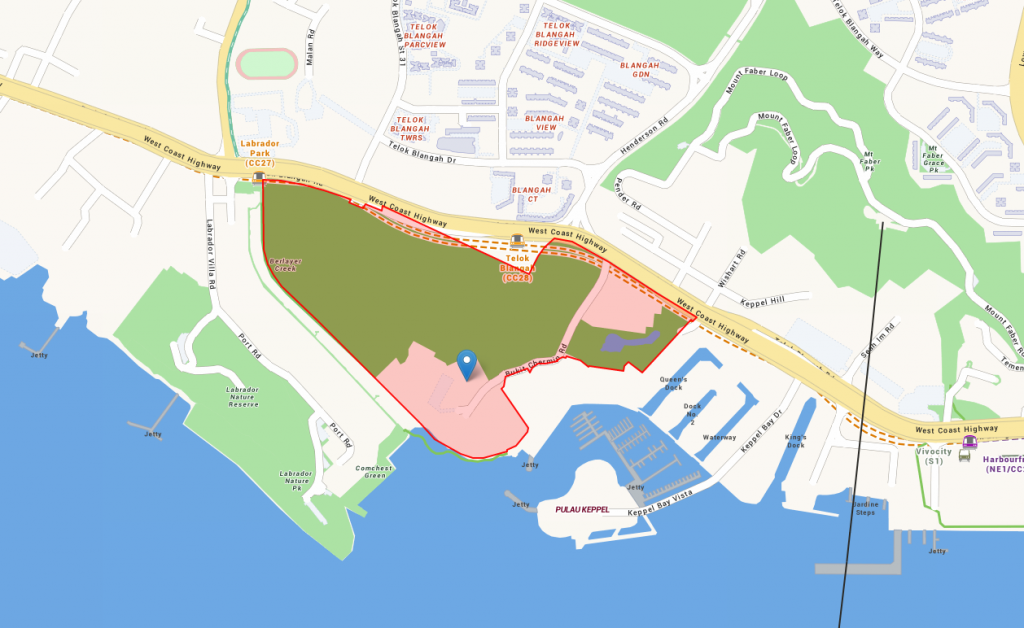 Aside from 6,000 BTO flats, another 3,000 private housing units will be built. The 48ha Keppel Club site is expected to attract keen interest among developers due to the rarity of securing a waterfront site, reported TODAY.

“Waterfront living will be a key selling point for both buyers and developers,” said Lee Sze Teck, Huttons Asia’s Senior Director of Research, adding that interest would be highly subject to the site’s size, absolute quantum and tender conditions.

Private housing to be built at the site would likely be a mix of high-rise and low-rise condominium units as well as some strata-landed housing.

PropNex Realty Head of Research and Content Wong Siew Ying forecast selling prices for the units to stand at $2,500 to $2,700 per sq ft (psf) or higher.

Families with young children may find the site appealing since it is located near several choice primary schools, such as Gan Eng Seng Primary School and Radin Mas Primary School, all located within 2km of the site. Telok Blangah MRT station is also a quick 10-minute walk from the neighbourhood, connecting residents with the rest of the city via the Circle Line.

Speaking during a virtual dialogue on URA’s long-term plan review, Lee shared that URA is also exploring ideas on how to integrate more flexible spaces within residential neighbourhoods that can be adapted to respond to unexpected situations such as the COVID-19.

The review, which is now in its third phase, saw over 15,000 Singaporeans participate in the engagement efforts since its launch in July last year. Lee chaired the dialogue on the future of living and the environment, which was attended by 250 members of the public.

“These conversations have helped us to better understand the aspirations of Singaporeans and helped us to crowdsource ideas that we can study further,” said the minister.

From 1 November 2021 to 31 March 2022, a total of 21 complaints were received by CASE against the three businesses, of which seven were against Sense Visual, nine against Sense Construction Werkz and five against K&L Interior.

The watchdog shared that majority of the complaints were for failure to complete renovation projects as per committed timelines even as consumers have made substantial payments upfront.

Some consumers also complained of mistakes in the renovation, paint and electrical works as well as of the companies increasing project costs without their consent.

“According to consumers, the total contract value of the renovation works amounted to an estimated $580,000,” said CASE. Turner & Townsend expects the performance of the construction industry to remain below pre-pandemic levels for the most part of this year even as the sector’s growth neared its 2019 levels, reported Singapore Business Review.

This comes as the worker retention scheme of the government from September 2021 to February 2022 only managed to partially mitigate project delays and labour costs, said the professional services firm.

Aside from labour woes, the dependence of the local industry on imports was also dragged down following a spike in oil prices, while global supply chain challenges will continue to push up construction material prices as well as the cost of transport and machinery operations.

Notably, the construction sector registered a 2.9% growth in Q4 2021. Citing projections by the Building and Construction Authority, Turner & Townsend noted that overall construction demand for this year may reach between $27 billion and $32 billion, following a 42% hike last year totalling $29.9 billion.

The delays in the construction of new homes have resulted in a rise in rental and resale property levels as buyers look for completed properties or choose to rent while waiting for their units to be completed. This pent-up demand for homes may fuel the demand for new construction projects once the situation returns to normal.

It noted that such factors also caused transactions for non-landed private homes, excluding executive condominiums (ECs), to drop 42.2% to 4,071 units in Q1 2022.

Related article: New Launch Condos and ECs for 2022: 11 Upcoming Projects We Can Expect

“Buyers and sellers in both the primary and secondary markets held back, leading to a cycle where transactions stalled,” said Knight Frank.

Some buyers were also forced to turn to the resale market amid the lack of new launches and longer construction timelines within the private home market.

Looking ahead, Knight Frank expects private home transaction volume to pick up in Q2 2022 as developers start to launch projects and the Vaccinated Travel Framework gains momentum. It expects this year’s new sales volume to hover at about 8,000 to 9,000 units, while prices are forecasted to be more subdued, rising 1% to 3% only. The Ascott, the lodging business unit of CapitaLand Investment Limited (CLI), targets to sign 150 properties with more than 30,000 units under its lyf co-living brand by 2030.

Currently, Ascott has 17 lyf co-living properties with more than 3,200 units across 14 cities and nine countries. Notably, lyf properties offer apartments, experiential programmes and social spaces that are designed for guests “to forge connections and nurture a strong sense of community”, said Ascott in an SGX filing.

The Ascott Serviced Residence Global Fund presently owns two lyf properties – lyf Funan Singapore and lyf Gambetta Paris, which is the first lyf-branded property of Ascott in Europe that is set to open next year.

“We see the potential to expand our lyf portfolio to 150 properties by 2030. In addition to growing the lyf brand via management contracts, we also see attractive opportunities for our private funds and Ascott Residence Trust to deploy more investments into this product class,” said Kevin Goh, CEO for Lodging at CLI.

Related article: Co-Living Amid COVID-19: Why Is Co-Living Making A Comeback in Singapore?

A four-storey freehold commercial building at 381 Joo Chiat Road, which comes with an attic and basement carpark, has been put up for sale via expression of interest (EOI) with an indicative price of $50 million, revealed joint marketing agents CBRE and Savills.

Boasting a 16.5m frontage, the building’s ground floor has approval for permanent restaurant use, while its upper floors are “approved for function room (Levels 2 and 3), office (Level 4) and ancillary resting area for staff (attic)”.

The basement car park can accommodate up to six cars. The marketing agents noted that the incoming owner could utilize the development’s signage and naming rights for branding purposes.

The EOI exercise for the property closes on 12 May.

Benjamin Su, Digital Content Specialist at PropertyGuru, edited this story. To contact him about this story, email: benjaminsu@propertyguru.com.sg