Government ramps up confirmed private housing supply for 2H 2022, Paya Lebar Air Base site to be transformed into heritage district and more

The Government has raised the supply of private housing on the Confirmed List under the Government Land Sales (GLS) programme for the second half of 2022. Meanwhile, the Urban Redevelopment Authority (URA) is studying proposals to transform the Paya Lebar Air Base site into a heritage district.

The Government has raised the supply of private housing on the Confirmed List under the GLS programme for the second half of 2022 by about 26% to 3,505 units from 2,785 units in the first half of the year.

Notably, this is the fourth consecutive time that the Government has increased the Confirmed List supply.

Among the sites unveiled by the Government is the first site in Marina South – Marina Gardens Lane located next to Gardens by the Bay. It is set to kickstart development within the precinct. Overall, 14 sites were unveiled under the GLS programme for 2H 2022, of which six are on the Confirmed List and eight on the Reserve List, showed URA data.

While the supply of 3,505 private homes is the highest since 3,915 units were offered under the 2H 2014 GLS, PropNex Realty CEO Ismail Gafoor believes the hike is measured and “may not fully satiate the hunger for residential land among developers”.

With this, he expects developers to continue to tap the collective sales market to complement their development pipeline.

Aside from the Marina Gardens Lane site, there are five other sites on the Confirmed List: Bukit Timah Link, Lentor Gardens, Tengah Plantation Loop (EC), Hillview Rise, and Tampines Avenue 11. Click to read more about all the GLS sites for 2H2022.

The Paya Lebar Air Base site could be transformed into a heritage district that is built around its existing infrastructures such as the hangars, control tower and the former passenger terminal buildings.

The 800ha site, sandwiched between Serangoon and Hougang to the west and Tampines and Pasir Ris to the east, will be freed up for development when the airbase is relocated in the 2030s.

Other proposals put forth include a car-lite town and a sustainable and energy-efficient town in which at least 50% of its energy needs are supplied by waste-to-energy plants and solar farms. 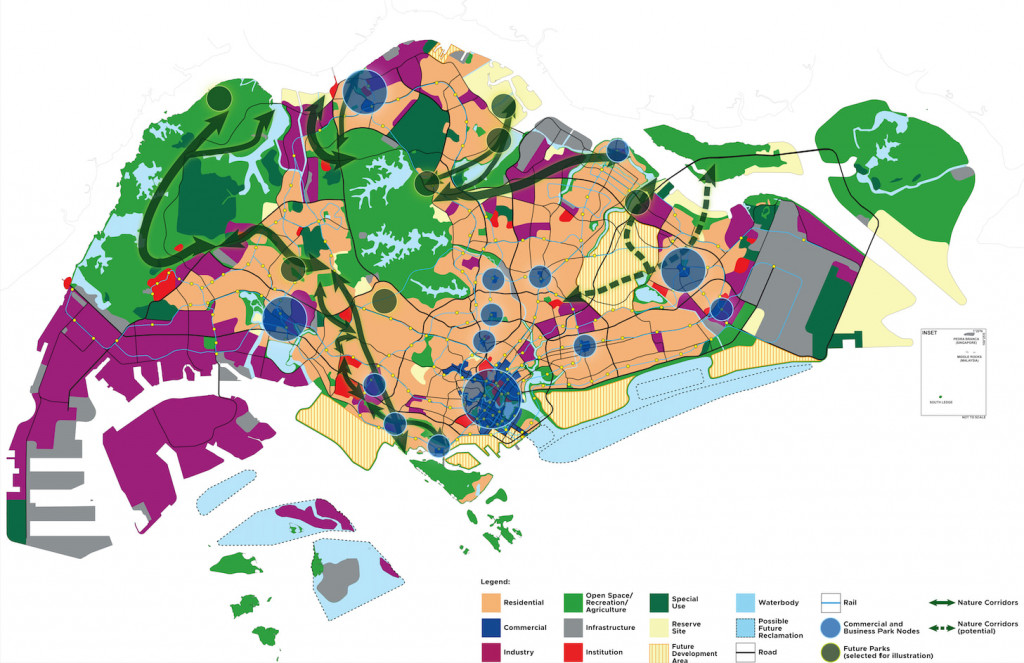 Providing more attractive and flexible workspaces to support innovation and new needs of workers and businesses are among the proposed concepts for Singapore’s development in the next 50 years.

URA shared that it is exploring a “vertical zoning” concept for industrial estates, in which different but complementary uses are integrated into a single development, reported Channel News Asia.

It also revealed plans to provide more inclusive housing options as well as more flexible flat layouts, allowing homeowners to configure the spaces based on their needs.

The planning concepts and strategies were unveiled at a public exhibition titled “Space for Our Dreams”, following a year-long public engagement exercise that began last July.

“We will continue to refine the concepts, strategies, and proposals to ensure that they stay relevant to the needs of Singaporeans and Singapore,” said URA.

The exhibition will run until 4 August, with URA encouraging visitors to provide their feedback.

In URA’s plan for Singapore in the next 50 years and beyond, Bayshore and Upper Changi will see public and private housing built, turning these areas into future housing towns. Potentially, new homes could also be constructed in Marina East and Marina South (in the CCR), and Lower Seletar and Chencharu in Yishun (in the OCR).

The sale of three Housing and Development Board (HDB) flats – two in Woodlands and one in Pasir Ris – for over a million dollars in May is not expected to have a significant impact on the prices of smaller flats in such towns, reported TODAY.

This comes as the flats were large-sized, at 189 sq m each – making them the biggest of the 30 million-dollar flats transacted last month.

“Clearly, the lack of new supply of five-room and larger flats are forcing buyers to chase after limited supply in the resale market and supporting the rising number of such million-dollar transactions,” said Huttons Asia CEO Mark Yip.

But given the limited number of such flats, OrangeTee and Tie’s Senior Vice-president of Research and Analytics Christine Sun does not expect many successful transactions in the future.

Despite the seemingly increasing frequency of million-dollar HDB flat transactions making the news, such deals make up about 1% of all HDB resale transactions. While HDB resale prices continue to climb, according to the PropertyGuru Singapore Property Market Report Q2 2022, small gains or a price plateau is expected this quarter.

Related article: HDB Estates With Flats Trending Towards 1 Million Dollars: Where Will The Next Estate Be? 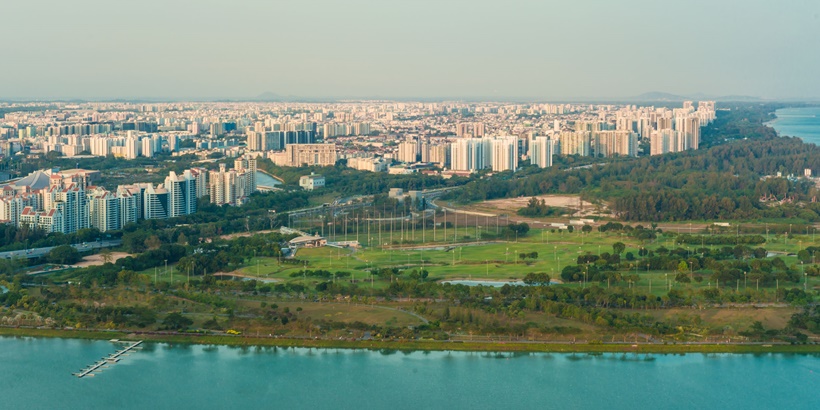 Huttons Asia’s Senior Director of Research Lee Sze Teck estimates that around 10,000 to 15,000 housing units could be built on the reclaimed site.

“Homes by our limited coastline are always coveted and highly sought after,” he said.

Some residents living near the proposed reclamation site hope the area’s charm and tranquillity would be retained should the authorities push through with the development.

ERA Realty Network’s Head of Research and Consultancy Nicholas Mak does not expect such development to affect property prices within the area since a significant number of them are freehold or with long 999-year leases.

URA revealed that it was studying a proposal to reclaim 15km of land from Marina East to Changi. It noted that aside from offering coastal protection, the area can also be developed for new homes and as a new leisure and recreation spot.

Future residents of ‘Long Island’ properties are likely to be serviced by the Thomson-East Coast Line, which is expected to be fully operational by 2025.

6) New nature corridor to be established in Khatib A new nature corridor – featuring five parks, three of which are new – will be established in Khatib over the coming years.

TODAY reported that the Khatib Nature Corridor will cover over 90ha of green spaces, which is equivalent to the size of the Jurong Lake Gardens.

The five parks within the ecological corridor include the previously announced Khatib Bongsu Nature Park, set to be ready by 2026, and the Canberra Park. The three new ones are Miltonia Nature Park, Nee Son Nature Park and an extension of Lower Seletar Reservoir Park.

Khatib Nature Corridor will likewise be linked to three recreational routes – the Coast-to-Coast Northern Trail, the Round-Island Route and the Central Corridor – which connect to other parts of the city-state.

The new nature corridor was identified following an ecological profiling exercise by the National Parks Board (NParks) across the island.

In line with the SG Green Plan 2030, every household is set to be within a 10-minute walk of a park by 2030. With these new nature parks, residents can reap the benefits of living near nature and enjoy green spaces in an increasingly built-up city. 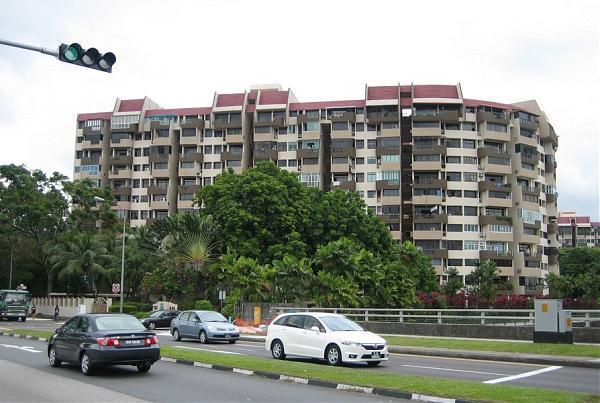 Located in Jurong West, the 99-year leasehold development comprises 304 residential units and five shop units. It occupies a 562,286 sq ft site zoned for “Residential” use under the 2019 Master Plan with a plot ratio of 1.4.

The development was relaunched for en bloc sale on 19 April carrying a reserve price of $640 million.

“While there was interest in the Lakepoint Condominium site among developers, we did not get a bid at the close of the collective sale tender. We will now enter into private treaty negotiations with interested parties,” said Tracy Goh, Head of Investment and Collective Sales at PropNex.

“Under laws governing collective sales, owners of the development may enter into a private treaty contract with a buyer within 10 weeks from the tender closing date.”

The property is located near Jurong Innovation District, Jurong Industrial Park and Jurong Mega Port. The closest MRT station is Lakeside on the East West Line, which is a 5-minute walk away from Lakepoint Condominium. Nearby shopping malls Westgate, Jem, IMM, and JCube give residents access to a variety of amenities.

Wendy Liu has been living in fear after the false ceiling of their recently renovated bedroom collapsed on the bed.

Fortunately, she and her three children, who were aged eight, two and one, were out to take some pictures, reported TODAY. Her domestic worker, who was left at the house, told her that it “sounded like an earthquake, like a huge impact”.

“I keep thinking about how we could all have been sleeping on the bed… I’m very sure we could have died,” she said.

SR Tech Engineering, the contractor that carried out the renovation, has arranged to put the family at a hotel, while they fix the damage. It is also discussing the settlement amount with the family.

Liu said she has not been sleeping properly since the incident.

“I feel like I’m living in fear,” she said. “It’s, like, I don’t know when the ceiling or the fan or the air-conditioner will fall on me and my family.”

Rated AAA by Fitch Ratings, the notes come in denominations of $250,000, with a coupon of 2.627% per annum payable semi-annually in arrear.

While approval in principle for the notes’ listing on the Singapore Exchange Securities Trading Limited has been obtained, their admission to the official list should not be taken as an indication of the merits of the Housing Board, its subsidiaries or the notes, said HDB.

Under the MTN programme, HDB may “from time to time, issue bonds (or notes) to finance its development programmes and working capital requirements as well as to refinance the existing borrowings”.

Located at 120 Spencer Street – opposite the Southern Cross Station, which is a major transport hub that connects to the wider Melbourne region – the freehold building has a net lettable area of 32,000 sq m and a committed occupancy rate of 97.5%.

It has a long weighted average lease expiry (WALE) of 6.7 years, with tenants including WeWork as well as prominent local educational institutions like Redhill Education and Central Queensland University.

It is COREF’s first acquisition in Australia and fourth within the Asia Pacific (APAC) region. Established in August 2021, the fund has made a total investment of around US$900 million ($1.25 billion).

Meanwhile, in local news, a Singapore resident bought an entire floor of Suntec City Tower 2 for $38.8million. The 11,743.52 sq ft office space sits between the 26th and 30th storey.